But ask audiophiles and radio fans, and they might invite you to turn this phrase around. For us, it’s words that paint the picture.

The Golden Age of Radio

From the 1920s to the 1950s, radio enjoyed a Golden Age. Families would gather around their radio and listen to favorite programs, many of them airing daily or weekly. These shows captured imaginations as firmly and passionately as popular programming does today. Binge listening wasn’t possible then, but fans wouldn’t dream of missing the latest episode of “The Shadow” or “Johnny Dollar”.

Every year on August 20, National Radio Day invites us to celebrate and recognize radio for what it brings to our lives. This year, we asked residents to share their memories of favorites from the Golden Age of Radio. Here’s what they had to share with us. 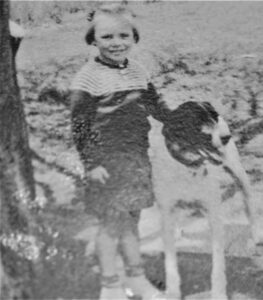 The instant I read your notice, my heart warmed, and I went all gloppy with memories of the radio shows that roused my imagination 75 to 80 years ago.  “The Lone Ranger” (Hi Yo, Silver! Get ‘Em Up Scout) “Jack Benny”, “Uncle Don’s Breakfast Club”, “The Thin Man, “Days of our Lives”, “Stella Dallas”, “The Guiding Light” and, of course, “The Shadow”. (Who Knows? The Shadow Knows!)

My all-time favorite was “Lux Radio Theater”, which went on the air after my bedtime. However, thanks to my understanding and creative parents, I heard the show every week, while still, sort-of-legally, being in bed. It worked like this: Being almost as poor as the proverbial church mice, we lived in a basement level, railroad-style apartment—four small rooms, all in a row. The radio was in the living room, the first room. My parents’ twin beds took up almost every inch of the second room. The foot of my mother’s bed was about two feet from the doorway between the bedroom and living room.

On Lux Radio Theater nights, my mother tucked me into her bed, kissed me goodnight and, leaving the door open, went into the living room where my father, with a sly smile, turned up the radio volume so that a nine-year-old girl could wriggle out from under the blanket, crawl to the end of the bed, hang her head out toward the open doorway as far as possible and, with bated breath, listen to the high drama of Lux Radio Theater. That little girl laughed, cried, sighed, swooned, gasped in fear, held her breath in excitement and created memories that remain indelible to this day, 80 years later. Thanks to wonderful parents who understood how and when to fudge the rules.

Today I googled that old show and learned that it was “indisputably the biggest, most important, most expensive drama anthology on radio between 1934 and 1955.” In 1943 it won a Peabody Award. And it’s special to me because I’m sure it influenced the formative years of my training to become a writer.

In my so-called Golden Years, I’ve enjoyed TV shows such as “Downton Abbey” and “Veep” (both discontinued) and am currently addicted to CNN. Not one of these offers a child or adult the surreptitious titillation of good old “Lux Radio Theater”.

I grew up with one ear glued to our table model Bakelite radio. My favorite program after school was  “Sergeant Preston and the Challenge of the Yukon”, sponsored by Quaker Puffed Wheat and Puffed Rice. Each cereal box contained two dog trading cards. For several weeks, we had to eat this very bland breakfast cereal (Puffed Rice tasted like paper) until finally a new box yield the prized card, Sergeant Preston’s wonder dog Yukon King.

In the evening, I loved the mystery programs. Especially “The Whistler”, with its haunting opening whistle, followed by this: “I am the Whistler and I know many things, for I walk by night. I know many strange tales, many secrets hidden in the hearts of men and women who have stepped into the shadows. Yes, I know the nameless terrors of which they dare not speak.” And on Sunday afternoons there was “The Shadow”, aka Lamont Cranston, who knew what evil lurked in the hearts of men.

By the mid 1950s, radio had been replaced by television in many American homes, and while some of the radio shows made a successful transition to TV, most were not as good as they had been. Radio left so much to the listener’s imagination, TV left little. Every listener had his or her own mental version of what a show’s characters, locales and events looked like. TV showed everyone the same picture. Perhaps many viewers preferred this—after all, Jack Webb WAS “Dragnet” detective Joe Friday—but I missed the old radio shows, and I still do.

When I was growing up in Toronto, listening to King George’s Christmas speech on the radio was a Command Performance. My mother would spread newspapers in front of the standing radio, which was bigger than I was. She put bars of Ivory soap and a dull knife on the paper so that my sister and I could carve animals from the bars. I have no idea how creative either one of us were, but we looked forward to that assignment more than to the King’s speech.

My bedroom was directly above the library where my mother and father would settle down to read after dinner. Like most kids, I was never happy about going to bed, but my situation was rather precarious because my bed creaked and mother and dad could hear me if I moved around too much. Mother would call out, “Go to sleep, Judith!”

My solution to sleeplessness was to pull the bedside radio under my covers. I spent many happy times listening to “The Shadow”, “Dick Tracy”, “The Lone Ranger”, “Gunsmoke”, “Fort Laramie” and “Roy Rogers”, to name a few. My favorite shows were the Westerns because I had dreams of owning a horse and riding throughout the Wild West with my dog by my side. My evening adventures often ended with the bottom slat falling out of the four-poster bed if I wiggled around too much and my dog and I would slide down to the end of the bed at an angle. I would have to scramble to get the radio back where it belonged before my father came upstairs to put the slat back in. Why he didn’t get a slightly longer one, I will never know.

I listen to “The Big Broadcast” Sunday nights on local NPR station WAMU. I listen over my computer at dinner. When I was growing up, I listened to these shows in bed as I was falling asleep. In mid-life, I listened to Ed Walker because I couldn’t fall asleep. Now, I fall asleep pretty much before the show starts. My tastes have changed. “Fibber McGee and Molly” is still a favorite.

It seems clear that radio left these fans with indelible memories that endure. If you have stories to share of your own, please let us know (email us at goodlife@goodwinliving.org)—we’d love to hear from you. And if you don’t have favorite, we invite you to visit the links found throughout this article to explore some that we’ve shared and let us know if you discover one that captures your imagination.

As Corporate Director of Marketing & Communications, Kathie Miller provides strategic guidance and tactical support for all areas of Goodwin Living. She writes, edits and manages The Good Life blog and newsletter. Kathie joined GHI in 2014 after nearly 15 years at NPR, where she honed her skills in brand and reputation management, content marketing and internal communications. Originally from Pennsylvania, Kathie has slowly come to realize she’s lived in Arlington for more than half her life and should call herself a Virginian. She enjoys the outdoors and brings her rescue dog, Remi, to work every day.

Engagement and Connection Through Horse Therapy

As we age, falls can become more common, but they are not inevitable. Goodwin Living Director of Home Health Services, Alexandria Ramirez, has tips to help!